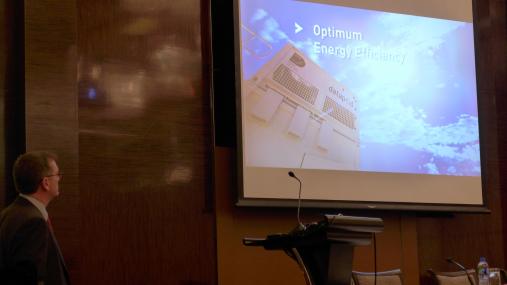 The Asia-Pacific’s 65 most influential CIO’s have embraced the building block modular data center approach presented by Datapod at the recent CIO Summit in Hong Kong.

Faced with budgetary restraints and the weight of positioning their organisation to capitalise on accessing, using and protecting big data, as well as data center optimisation, Datapod has successfully positioned the Datapod System as a data center solution that enables CIO’s to meet these challenges.

The Summit enabled Datapod to address a knowledge gap in the market with 40% of CIO’s either unaware of modular data center 2.0 technology or the benefits associated with the technology before the Summit began.

Datapod filled this knowledge gap by hosting a workshop and a series of meetings.

Datapod Co Director Adam Smith also attended the Summit and said interest in the Datapod System is increasing because of a shorter time frame to deployment and operation, a reduction in costs and the ability for the modular data center infrastructure to be factory acceptance tested before shipping and onsite assembly.

Mr Smith said, “The building block design of the Datapod System is providing CIO’s with flexibility and cost savings and this is driving awareness across the data center industry. The modular design, flexibility and quality of the Datapod System means CIO’s can overcome current challenges and, in some cases, leapfrog to the newest technology which then enables IT to drive the organisation instead of holding it back.”

Mr Smith added, “This repositioning has significant advantages for the modern CIO, it provides them with better budget control and management of risk because the data center can be viewed as a machine and becomes a piece of IT equipment as opposed to a building that houses IT equipment with responsibility being shared across portfolios or departments. This enables CIO’s to achieve focused outcomes for the entire organisation.”

The Summit also identified 20 per cent of CIO’s identified data center optimization as the major issue facing their organisation in the short to medium term and for many the Datapod System presented a cost effective and flexible in-house data center solution.

The Datapod System satisfies all the criteria of an enterprise grade data center in a modular configuration including high density processing of up to 30KW per rack enabling organisations to move more easily to an increased data center virtualization environment.